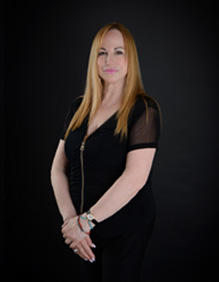 Alessandra Casciotti was born in Rome where she is still living and working. After the completion of her painting education, her artistic production has gradually increased and focused on recurrent  themes: Greek and Roman mythology, the language of symbols, the study of  classically inspired figures cohabiting with the rational taste of architectural and scenographic geometrical partitions and chromatic constructs, with  a research on materials and three-dimensional art. The constant references to tradition both in formal terms and in inspirational principles are reinterpreted in a contemporary key through experimenting techniques and innovative interpretations giving the paintings a suspended atmosphere, sometimes dreamlike and metaphysical, that is a personal mark made of spiritual and communicative tension.

Alessandra Casciotti exhibitions, according to the development of subjects and experiences, started and then constantly increased by participating in various and important group exhibitions hold in different national and international  art “places” such as Roma, Venezia, Berlino, Tirana, Abu-Dhabi, Spoleto, Orvieto, Assisi, Alassio.

In particular, mention is to be made of her participation on 2019 to the 58th BIENNALE DI VENEZIA in the pavillon of the Dominican Republic, where an Alessandra Casciotti’s “materic” artwork was selected showing the peculiar expressive code used by the artist in her research on spaces, three-dimensional art and interpolation between painting and matter.  On 2020 other two artworks of her were selected, among thousand of candidates, to participate in the exhibition PACE e AMORE (PEACE  and LOVE),official event, that took place in the context  of   EXPO 2020 DUBAI-ABU-DHABI  (event that, due to pandemic,  has been held on 2021).

Over time, crowning the interest aroused by her artworks, she held numerous personal exhibitions gradually  showing the ripening of themes and elaborations. On 2016 at the Torre de Guevara in the isle of Ischia, the exhibition IL MITO NARRANTE was held and, a year later, it was resumed and expanded in IL LINGUAGGIO DEL SIMBOLO – FASCINO E MISTERO NEL MITO E NEL CONCETTO (THE LANGUAGE OF SYMBOLS  – FASCINATION AND MYSTERY IN THE MITH AND IN THE CONCEPT) held on 2017 at the Biblioteca Angelica in Rome.

On 2018, in Naples at the noble headquarters of Circolo Artistico Politecnico, was held the exhibition FORMA MENTIS – FIGURE E GEOMETRIE, VISIONI E CONCETTI (FORMA MENTIS – SHAPES AND GEOMETRIES, VISIONS AND CONCEPTS),highlighting the connection between figurative systems and geometric abstract patterns  in the artist’s  aesthetic and  ideal approach.

On 2021, Alessandra Casciotti’s artworks included in her  personal exhibition entitled CONTAMPORANEITA’ DEL MITO (CONTEMPORANEITY OF THE MITH) have been housed in the exhibition spaces of Rocca Sanvitale, in Fontanellato (PR), the perfect setting to fully appreciate the contemporary relevance of her message and language, thus the form/substance by which the painter transposes common archetypes and traditions.

Many Alessandra Casciotti’s artworks have been highly appreciated by the selection committees of several awards and events and her artworks appear both in private and in public art collections. Just to mention some of the many awards she received , on 2015, the artwork entitled Opportunità (Opportunity) was given a Special Mention in the exhibition-competition ART HUG in Rome. An artwork of her is included in the permanent exhibition of the museum Fondazione Circolo Artistico Politecnico collection in Naples. Furthermore, the Italian Ministry of Culture, fulfilling its mission of cataloguing the works exhibited in the Museum, has considered the picture donated worthy of attention and official recognition. The artwork 6 MI LE NA is exhibited in the hall of the luxurious and historical hotel Britannique in Naples. On 2021, Alessandra Casciotti’s carrier was awarded the Special Award of the Critic and of the Artistic Directors at the SPOLETO ART  FESTIVAL 2021 International Award.

Alessandra Casciotti’s artworks have been estimated and quoted.

Personal  exhibition  THE LANGUAGE  OF  THE  SYMBOL  – Charm and Mystery in the Myth and the Concept – at the Gallery and  the Hall Monumental  Angelica Library  located  in  Rome on  13 – 17 February 2017. The catalogue was published.

Personal  exhibition  FORMA MENTIS – shapes  and  geometries, visions and concepts – organized  in the expositive rooms of  Circolo  Artistico Politecnico  located in Naples  on  November  17 – 30, 2018.  The catalogue was published.

Exhibition – Figurative and Plastic Arts Contest ART HUG, 20-22 May 2015, organized at the Cultural  Centre  of the  Egyptian Embassy  in Rome.

Contemporary  Art  exhibition – 28th  edition of the PREMIO URBIS ET ARTIS, 20-30 July 2015, organized in the exposition rooms  of the  Teatro  dei  Dioscuri  in  the Quirinale  Palace  in Rome .

Contemporary  Art  exhibition GOOD VIBRATIONS, 14-30 September 2015, organized in the exposition rooms of the Teatro dei Dioscuri in the Quirinale Palace in Rome. The catalogue was published.

International  Contemporary  Art  Festival   L’ARTE  COME  ENERGIA CREATIVA  (Art  as  a Creative Force) 16-23  October,  2015 organized in the exposition rooms of the  Teatro  dei  Dioscuri  in the Quirinale Palace  in Rome. The catalogue was published.

Collective Art exhibition  FEMMINISSAGE,  23 February to 13 March 2016, in the exposition rooms of the Teatro  dei  Dioscuri  at  the  Quirinale  Palace  in Rome. The catalogue and the exhibition was published.

Collective Art exhibition  EIDOS, All the descriptive forms of Beauty, 10 to 18 May 2016, organised at the Pontifical  Theological  Faculty  of  San  Bonaventura – Seraphicum  in Rome. The catalogue was published.

29th Edition of the Contemporary  Art  exhibition  PREMIO URBIS ET ARTIS,  8  to  17 July 2016, organized in the  exposition  rooms  of  the  Pontifical Theological Faculty of San Bonaventura – Seraphicum in Rome. The catalogue was published.

International  Event  JUBILAEUM EXHIBITION,  20 selected artists,  6-11 September 2016 which was held in the exposition rooms of Palazzo Ferrajoli in Rome.

Contemporary  Art  exhibition  STELLE  DI  NATALE,  10 December – 8 January 2017, in the exposition rooms of the  Pulcherrima Gallery in Rome. The catalogue was published.

Review of contemporary art MATER MEDITERRANEA on 13 – 30 June 2019 in the exhibition rooms of the International Islamic Center of Rome. The catalogue was published.